Within the context of a cooperative project between the Institute of Sports Medicine of FSU Jena and the Department for Haemostaseology of LMU Munich (Prof. Dr. W. Schramm), a comparative study concerning motoric skills and their trainability in individuals with haemophilia and healthy controls (HEP I) was conducted between February and November 2000. The study proved that apart from reduced muscle strength, there also exists an impairment of selected sensomotoric skills in patients with haemophilia. Additionally, the study revealed that these skills can be positively influenced within the framework of a six-month long sports therapy.

The contents which had been developed in HEP I were incorporated in the following project HEP II in autumn 2001. This follow-up project which its aim of “helping haemophiliacs to self-help” was implemented in the Medical Park Chiemsee as a sports camp for haemophiliacs (HEP II) (October 25th – 28th , 2001). Twenty-four individuals with haemophilia as well as ten accompanying persons participated in this sports camp HEP II. The first sports camp was specifically based on the needs individuals with haemophilia. It aimed at individually improving the motoric skills of participants, a goal which was, according to the participants’ feedback, achieved. The main focus of the sports camp was the development and practice of motoric movement patterns, particularly in the area of coordination, in order to enable and guarantee an improved joint alignment. First of all, the joint situation was recorded through an examination and a questionnaire. Furthermore, coordinative skills were objectified by specific tests. Then, the sport therapeutic practice took place in assorted training sessions, with the goal of improving basic stability of the body, accompanied by individual and mild strength training. The next step was the targeted improvement of global and local stability, e.g. by Tai Chi exercises accompanied by music to improve movement harmony. A theory-based lecture about the contents of the training concept completed the mainly practical focus. Noontime Sunday the camp was concluded, without any complications, after a final meeting with a parkour called the “coordinative knot”.

In autumn 2002 (October 10th – 13th) the second sports camp within the scope of HEP II took place, again in the Medical Park Chiemsee. The emphasis was on gentle relaxation techniques appropriate for the joints affected, as well as on endurance training based on the clinical picture. The “Myofascial Release Technique” proved to be a very effective and easily applicable method with immediate results. The focus of endurance training was on aqua jogging. The swimming pool of the Medical Park proved itself as qualitative valuable training location. In addition to these areas of particular foci, exercises for joint stabilization and coordination as well as muscle activation were also implemented, just as in the year before.

Based on last year’s experiences (six-month sports therapy in Munich 2000, sports camps at Lake Chiemsee in 2001 and 2002) the idea of a “programmed sports therapy” was developed with the aim to enable people with haemophilia to experience physical activity and the advantages of a special training program.
The third sports therapy project (HEP III) took place from October 2003 to October 2005. It was the first time a guided training had been combined with an independent home training. Key events of the project were seven collective sport camps, two- or four-day-long, over a period of two years. They took place in the facility of the Landessportschule Bad Blankenburg (Thuringia). In these camps, participants worked in groups and acquired techniques for improving their individual joint situation. The techniques were refined to the point that, with the help of learning material and guidance of experienced sports therapists, the participants were able to implement and conduct these techniques in their independent training sessions at home.

After the home training periods, the techniques applied were tested and continually improved in the following sports camps. Furthermore, new techniques and variations were added to the participants’ repertoire. Documentation and annual diagnostic examinations of joint function as well as coordinative and endurance skills served as control of training. In total, 33 adults from ten different German federal states participated in the project, each of them with moderate to severe haemophilia A and B. The Programmed Sports Therapy proved to be an appropriate programme in order to enable people with haemophilia participating in a sports therapy in spite of far distances to adequate and well-equipped treatment centres.

Due to many enquiries and broad support by patients, therapists from Germany as well as from associations (DHG – German Haemophilic Society and IGH – Syndicate of Haemophilic Individuals, registered association) and industry, the opportunity to continue the large-scale project with the subproject HEP IV was achieved. HEP IV began in January 2006 and ended in December 2008. Twice a year, in June and October respectively, 3.5 day collective sports camps were organized to train the participants in the familiar surroundings of the Landessportschule Bad Blankenburg. In the periods between the camps, the participants trained independently at home, receiving guidance by sports therapists and doctors via telephone and internet. Additionally, participating in one-day camps and individual therapy sessions at the Institute for Sports Medicine in Jena was also possible. An annual control of training was conducted with the support of scientific investigations during the sports camps in June. In total, 46 people with haemophilia between 19 and 65 years participated in the HEP IV project. Recent results illustrate the positive effects of a continual and consistent sports therapy on joint situation, motoric capacity, as well as quality of life of haemophilic individuals. The therapeutic methods employed within the framework of the HEP project in recent years have proven themselves to be effective, sensitive, and adaptable to individual needs. Therefore, they shall be made accessible to other patients with haemophilia, too. In the meantime, the fifth HEP - Sports Therapy project has been initiated in January 2009, by the name of “Haemophilia in Motion” (HIM).

The HIM I project is the consequent continuation of the successful “Haemophilia & Exercise Project”, in short, HEP. The team of this project has gathered ten years of experience in the fields of haemophilia and sports therapy. The aims of our therapy remain:

Along with individually adjusted sports therapy and training consultation, the personal knowledge of the people affected is supposed to be trained. Over several years, the concept of “Programmed Sports Therapy” has proven itself in practice and is still applied today. Training and further education concerning physical training will be incorporated in semi-annual collective sports camps in May/June, and in October each year. They are 3.5-day long events and take place at “Landessportschule Bad Blankenburg”, Thuringia. Independent home-training will be performed in the periods between the sports camps in which the participants will be supervised by a team composed of doctors, sports scholars and sports therapists. Furthermore, participants are given the opportunity of receiving a nutritional consultation by our expert nutritionist (gradtuated ecotrophologist).

The therapy’s main emphasis is put on improvement of body awareness, muscle and joint apparatus as well as, in the future, improvement of awareness of the cardiovascular system. Regular scientific examinations monitor the effects of training. Along with Prof. Dr. med. Dr. phil. Thomas Hilberg (Head of Project) assuming office at the Department of Sports Medicine at the University of Wuppertal on October 1st, 2008, office has moved from Jena to Wuppertal, too. www.sportwissenschaft.uni-wuppertal.de/sportmedizin/.

In addition to the Programmed Sports Therapy, we conducted a training study specifically aiming at improving strength capacity in persons with haemophilia. It started in January 2013 and contained a six-month period in which patients trained in cooperation with a health studio. A specific strength training tailored to the particular situation of patients with haemophilia was part of exercise and sports therapeutical measures. Hereby, the focus was on exercises for large muscle groups which were realized in qualified fitness centers or corresponding local institutions. In order to facilitate the training into the patients’ daily routines, these institutions were supposed to be located close to their homes. They were expected to train regularly, at least twice a week for 90 minutes per training unit. At the beginning of the study, each participant received a professional, detailed, theoretical and practical briefing about the therapy concept as well as the content. Furthermore, participants were extensively examined by means of various performance diagnosis and test procedures. 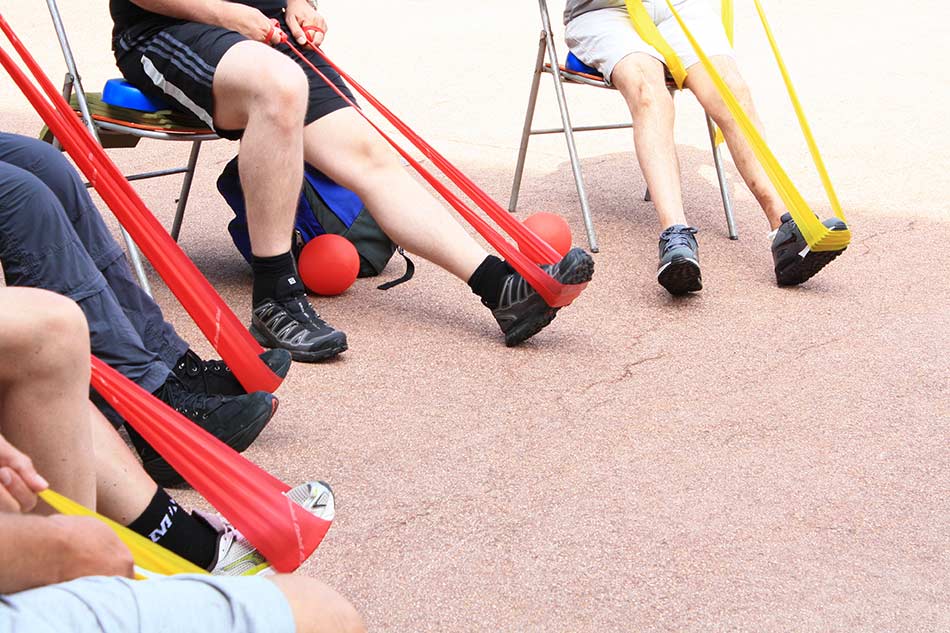